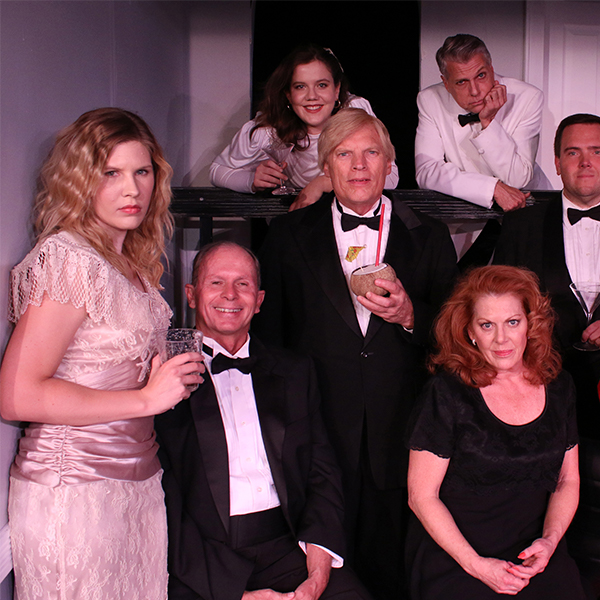 The Deputy Mayor of New York has just shot himself at his tasteful townhouse. Though his injuries are minor, four couples are about to throw themselves into a hilarious Farce. At a tenth anniversary party, the host lies bleeding in the other room while his wife seemingly disappeared. His lawyer, Ken and wife Chris struggle to get “the story” straight before the other guests arrive.

”I was going through some difficult times,” Neil Simon said. ”This marriage I was in was breaking up. My daughter’s husband was killed in an automobile accident. It seemed like rough going. And I said I wanted to work, because work is always a cathartic process for me, and I thought it would be really good just to get into a comedy.”

The door-slamming, hilarious farce ran for 535 performances on Broadway. Now, the team at Fountain Hills Theatre brings the wild ride that will have audiences rolling in the aisles to Arizona.

Rumors is directed by Peter J. Hill, ‘The King of Farce’ according to the Arizona Republic. The show is presented through Special Arrangement with Concord Theatricals. Please note advisory for some language. Recommended for ages 14+.

Rumors will play Sept 10-26, 2021.  Performances are Thursdays, Fridays and Saturdays at 7:30PM and Sundays at 2PM.  Individual tickets are $35.00 for Adults and $18.00 for Youth 17 and under. Seniors receive a $5.00 discount on all Thursday performances. Group rate discounts are available. Veteran and Active Duty discounts.  All performances are at Fountain Hills Theater on its Mainstage at 11445 N. Saguaro Blvd. (The Corner of Saguaro and Rand). Tickets are available through the Theater Box Office at (480) 837-9661 x3 or by visiting fhtaz.org.  Box Office Hours are 10:00AM-5:00 PM Tuesday through Saturday. For additional information not contained in this press release, please call Fountain Hills Theater Artistic Director, Peter J. Hill at (480) 837-9661 EXT. 7.