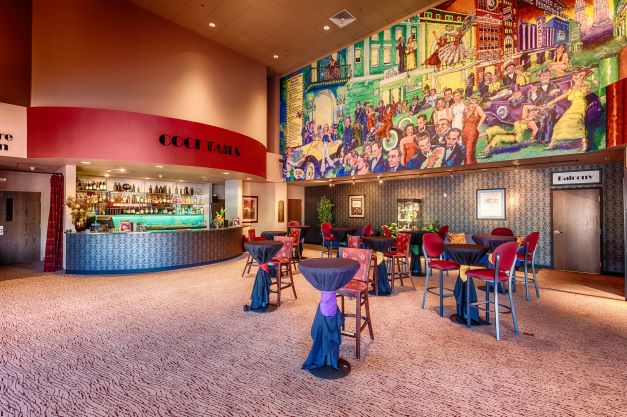 “We are excited to bring a new season of musicals to life here at ABT. Last week, we had the chance to see many of our donors and subscribers in-person as we hosted a special ‘Sneak Peek’ event, over three days,” says Kiel Klaphake, Executive Producer and CEO, “Many have been loyal patrons of the Theatre for over five to ten years. Some have even been here since the first show in the tent! We are beyond grateful for their current support and excitement for the upcoming new season.”

Monty Python’s Spamalot, the gloriously entertaining story lovingly ripped off from the classic film comedy Monty Python and the Holy Grail, opens the season this October. Monty Python’s Spamalot retells the legend of King Arthur and his Knights of the Round Table. The show features a bevy of beautiful showgirls, not to mention cows, killer rabbits, and French people.

The holiday season at ABT kicks off on November 18 with a special Holiday Tree Lighting Celebration, presented in junction with their annual holiday performance. This year, an Arizona Broadway Theatre holiday tradition returns with A Christmas Carol The Musical. The Broadway adaptation of Charles Dickens’ classic breathes fantastic new life into the classic tale.

In January, Mame comes to the theatre, following the madcap adventures of everyone’s favorite aunt, Mame. With an eccentric ensemble around her, she celebrates the Roaring ‘20s, shamelessly spoils her “little love,” and perseveres through life with humor and style. The Tony-nominated score by Jerry Herman is packed with favorites “Bosom Buddies,” “We Need a Little Christmas,” “Open a New Window,” “If He Walked Into My Life,” and more.

The new comedy Escape to Margaritaville comes to the ABT stage this March. This musical comedy features the most-loved Jimmy Buffett classics, including “Cheeseburger in Paradise,” “Margaritaville,” “Fins” and many more.

Dirty Rotten Scoundrels transports audiences to the French Riviera for high jinks and hilarity beginning May 5, 2023. The musical comedy based on the 1988 film features a delightfully jazzy score by David Yazbek (The Full Monty). The sophisticated and mischievous musical garnered eleven Tony Award nominations.

One of the the most beloved stories known comes to ABT with Wizard of Oz The Musical. Songs including “Follow the Yellow Brick Road” and “Over the Rainbow” bring together lovers of this classic story in summer 2023. Wizard of Oz the Musical, based on the 1939 film features songs and music by Andrew Lloyd Webber and additional lyrics by Time Rice.

Closing out the season, Disaster!, will have audiences laughing and dancing in their seats in August 2023. Disaster! parodies 70’s disaster movies with its epic characters and cheesy dialogue. The score features unforgettable songs “Knock on Wood,” “Hooked on a Feeling,” “Sky High,” “I Am Woman,” and “Hot Stuff.” This hilarious musical comedy comes from the mind of SiriusXM Broadway host Seth Rudetsky and Jack Plotnick.